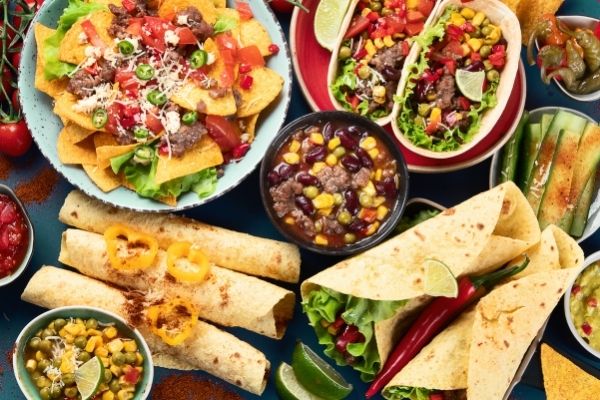 Mexico is one of the few countries in the world to have its cuisine as a “UNESCO Intangible Cultural Heritage.” The reasons behind why and how Mexico’s cuisine became so distinctive can be found in the vastness of the country, as well as in the history of its colonial and immigrant past.

Mexico has a long and rich culinary history that began long before the arrival of the Spanish. In this article we’ll take a look at Mexican food culture through the ages and how it shaped the diverse, delicious cuisine we associate with Mexico today. There are three main influences on Mexican cuisine as we know it: the Mayans, the Aztecs, and the Spanish. Before we dive into the cuisine though, let’s take a brief look at the timeline of pre-Mexican and Mexican history.

1500 BC – The Olmecs form the first large Mesoamerican civilization in the southern region of Mexico. During this time, crops that are still important in Mexican cuisine today are cultivated such as maize (corn), beans, and chile peppers.

250 AD – The Mayan civilization gains prominence in the region known as Mexico today. They are centered in the Yucatan peninsula but have a large influence all over Mesoamerica.

900 AD – The Toltec seize power as the Mayan civilization begins to decline. Their military might allow them to rise in power in the 10th century and establish their empire in what is now central Mexico.

1325 – The Aztecs found their civilization in Tenochtitlan and gradually formed alliances with neighboring city-states to consolidate their power. They created an intricate and advanced society, and their language, Nahuatl, became the dominant language of Mexico by the 1350s.

February, 1517 – Francisco Hernandez De Cordoba becomes the first European to set foot on Mexican soil. When half of his exploring party is killed, he asks the Spanish governor in Cuba to send a larger group of men to Mexico.

February, 1519 – Hernan Cortes sails for Mexico with almost 500 soldiers. They seize the town of Tabasco and later establish the city of Veracruz. He forms an alliance with the Tlaxcalans, powerful Aztec enemies, and sets his sights on overthrowing the Aztec empire.

August 13, 1521-Cortes defeats the Aztec empire and builds Mexico City on the ruins of the Aztec city of Tenochtitlan.

The Mayans were a largely nomadic civilization whose cuisine had a great influence on the history of Mexican food culture.

One staple of Mayan cuisine was corn, which was one of the few foods that was farmed on a large scale. In fact, we have the Mayans to thank for inventing the earliest form of the tortilla, a food that is central to Mexican cuisine today. The Mayans often ate tortillas with a paste made from beans given that meat was scarce in the region where they lived.

Although corn and beans were staples, the Mayans were essentially hunters and gatherers, so they also caught wild game, picked tropical fruit, and fished, all of which added variety and flavor to their cuisine.

Another important food in Mayan cuisine was chocolate, which was considered a gift from the Gods that had medicinal and mystical properties. (However, the Olmecs are believed to be the original makers of chocolate.)

Several foods and ingredients that were invented and cultivated by the Mayans remained popular during the Aztec Empire. However, they added salt, peppers, and domesticated game such as turkey and ducks to their diet. In fact, salt and chili peppers were so essential to Aztec cuisine that it was considered fasting if one abstained from eating these two ingredients.

When Hernan Cortes and the Spanish arrived in the Aztec city of Tenochtitlan in 1519, it is said he was invited to drink with King Moctezuma II,. However, it wasn’t fermented grapes he was offered, but a hot cup of xocolatl, a drink made from the dark brown beans that would soon be on the European import list and as valued as the gold Hernan had come to collect.

When the Spanish invaded the Aztec empire, they brought with them their own dishes, ingredients, and cooking methods. Notably, they brought new livestock such as sheep, pigs, goats, and cows which introduced a whole new array of dishes and a reliable source of protein. The introduction of livestock also led to the introduction of new dairy products, specifically cheese. which became a prominent part of the cuisine. They also brought garlic, olive oil, cinnamon, coriander, and rice, many of which are still cornerstones of Mexican cuisine.

Apart from the traditional Spanish cuisine, the invasion of Mexico by the Spaniards also led to the assimilation of foods and ingredients from other Spanish colonies and trading partners. Some of these cuisines included Caribbean, French, Portuguese, and West African Cuisines.

Cultural exchanges after colonial conquests never just went one way, and the invasion saw Mexico gain ingredients and cooking techniques from Europe which fueled the next stage of its culinary evolution. While the conquistadors hoped to largely do away with the local cuisine and transplant the Iberian palate to America, indegenous culinary roots ran too deep to be easily displaced. A cultural grafting took place where the assimilation of once foreign elements began to produce some of today’s most recognizable Mexican dishes.

When Spain invaded Mexico, they also invaded the land that is now Texas. For the next two centuries, the Spanish colonized the region in which Native Americans were living, which led to an amalgamation of the two cultures. When Mexico gained their independence, Texas was still part of their territory. It seceded from Mexico in 1836 and became a part of the United States in 1845.

Being a state meant that new foods were available in Texas such as beef, wheat, cheddar cheese, and cumin. Tejanos, the name for people of Mexican descent living in Texas, incorporated these new foods into traditional Mexican dishes. Eventually this new variation of Mexican food gained popularity and was coined TexMex cuisine. Some foods distinct to Tex-Mex cuisine are wheat tortillas, burritos, and nachos.

Mexico is a vast country with regional variations in landscape, culture, and food. If you want to try Mexican cuisine or learn more about it, you need to understand that there are 4 broad regions with distinct cuisines.

Interestingly, half the country is known as ‘the north’ with typical northern Mexican cuisine known for its cheese and meat dishes.

Seafood is also common in the region along with baby goat. The most famous dishes in this part of Mexico are the burrito, cabrito, and carne asada.

The north Pacific coast is popular for its fruits and vegetables. This is the area where the country gets its staple grain and fruits. The chiles and cheese that Mexico is known for are also grown and produced here.

Do you love tequila? You would be elated to know that Jalisco is the area that produces this iconic drink.

Head to the Bajio region for pork, sausage, and rice dishes. Apart from the pork dishes, this region is famous for desserts like cajeta, chinga, and bunuelos.

Southern Mexican cuisine uses chili peppers of different varieties. Chicken and cheese are also famous here. If you are interested in trying indigenous Mexican fare, this is the place to head to. Regional chili peppers, mole varieties, and chocolate are used in the dishes.

There are lesser known herbs such as hoja santa that are used to create unique dishes. Black beans are common in this region.

Moving further south, you would find corn and spices in abundance. It’s interesting to note that the cuisine of this area is different from the rest of the world. You would find Mayan influences as well as the impact of Cuban and Caribbean cuisine. Even food from Europe, Asia, and some Middle Eastern countries have a deep impact on the cuisine here.

Again, corn is the basic staple of this region. Spices like achiote are used in food preparation. Conchinita pibil (slow roasted pork) is the most popular dish.

Finally, we reach the Gulf. Vanilla is native to this part of Mexico and hence features in many dishes along with corn. The cuisine is a blend of Mexican, Spanish, and Afro-Cuban which makes it more delectable.

You would find people using herbs like thyme, parsley, marjoram, and cilantro, which were brought by the Europeans.

Seafood is very common here along with dishes like chicken and peanut sauce. Anyone who has ever tried Tobasco has become its fan, and this hot sauce is named after a state here. If you happen to be in Tabasco, try the seafood here. It is mindblowing.

Central Mexico, which contains Mexico City, is the melting pot of Mexican cuisine. You will find cuisine from other parts of Mexico as well as foreign countries prevalent here. This is the place to give your palate a real gastronomical experience with taco stands and lunch stands located on every street. As a beginner, try carnitas, moles, birra, and tortas. Experiment with pre-Hispanic food if your heart desires.

High quality street food can be found all over the country, and it is often the first choice of office workers coming out for sun and sustenance in the afternoon. Selecting what to eat can be the hardest part; with a choice of slow cooked pulled pork barbacoa tacos, mushroom and soft cheese in blue corn tortillas, and chicken grilled with smoky chipotle chilies, vendors from all over Mexico have got fine dining on the fly down to an art form.

Saying corn is the staple of Mexico would be an understatement. It is the most common item and used to make masa, a dough that is used in many popular dishes, tortillas, and tamales.

Mexican cheese is soft and crumbly and adds a distinct taste to local dishes.

Now we can’t talk about Mexican food without mentioning chillies. Mexico uses different types of chilies and they go in everything from soups to salsa. Moreover, they are used whole, fresh, smoked, dried, or powdered.

Mexican chocolate also has a distinct taste. It is bitter and of an earthy flavor that makes Mexican desserts like flan and mousse unique and delicious.

Butter is not a traditional Mexican ingredient, instead lard was used as the cooking medium. It gives the dishes a unique taste, however, nowadays people use more vegetable oil.

You may consider lime a simple item, but to a Mexican chef, it is the secret tool that adds a special zing. Be it tacos or salsa, without lime, it won’t taste as good.

Chipotles, or smoke dried jalapenos, contain heat and a smoky flavor that’s used in many dishes of Mexico.

Do you love the tangy flavor in Mexican fare? It usually comes from crema, sour cream that chefs use profusely.

Oregano has become a part of many international dishes, but the oregano used in Mexican dishes are more savory and aggressive….no wonder they make Mexican food so tasty and spicy.

Tomatoes are another ingredient used in Mexican cuisine to add taste and thickness to sauces.

Mexican food can also include lots of avocados (loved by everybody). It’s a Mexican staple that they consume in salads, sandwiches, and (of course) guacamole.

There are also a few exotic ingredients that are used in Mexican food like the mole. This is made of more than 30 different spices. You may be surprised to know that cactus is also used in cooking.

Many of Mexico’s most emblematic dishes are linked to festivals and holidays, where friends and families will gather to celebrate a saint, a wedding, a baptism, or a town anniversary. Eating and sharing meals is intrinsic to social life in Mexico.

The history of Mexican cuisine is ancient and forever evolving. Although the Mayan and Aztec Empires and the Spanish can take the majority of the credit for the delicious food we associate with Mexico today, you can find influences from cultures all over the world in Mexican food which is what makes it so complex and so tasty!