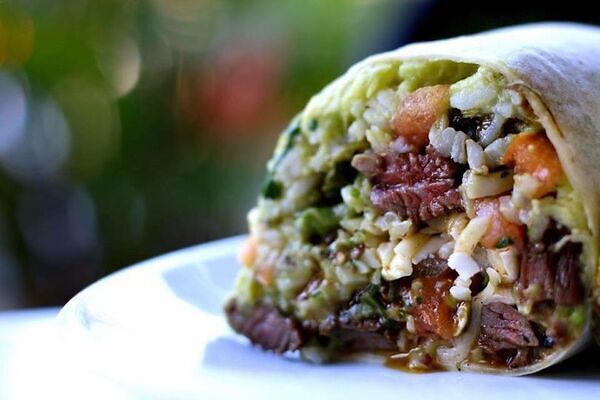 Who doesn’t like a great big delicious burrito? Yet, we all know that everything has to meld together perfectly for a burrito to work well. A great burrito has an intangibility about it, a magic that is greater than the sum of its parts. It plays to the beat of rice and beans mixing with meat while offsetting the cheese and vegetables. It’s held together with construction, sauciness and spiciness. It is the food version of a musical ensemble.

We want you to share our excitement with you! To us, the burrito is the perfect food. Portable and filling, it provides protein, fat, carbohydrates, and plenty of flavor. But have you even given much thought as to how the burrito came to be? How it gained such widespread popularity? Probably not? So we thought it might be fun to look into the history of this ubiquitous dish.

In 1519, the Spanish conquistadors arrived in what today is Mexico. Unfortunately, they did not come in peace and wreaked havoc and destruction on the native Aztec population.

Aside from this devastating development, they brought with them (among other things) wheat, flour, and pigs. This enabled the rise of tortillas and carnitas, the flour tortillas being more flexible than corn tortillas (corn being native to Mexico) and therefore easily rollable.

Despite this introduction, the native Aztecs still retained corn as their staple, though they did incorporate some European culinary ideas.

One area of Mexico was different, the northern part of the northern state of Chihuahua. Here, corn grows poorly, but wheat does well.

Also, in this area, some unsung villager of the late 19th century created the flour tortilla. Sometime afterward, someone rolled the tortilla around some meat and named it a burrito for its shape, which resembles the bedrolls carried on the back of donkeys. But the word burrito did not appear in print until 1895 in the Spanish language Diccionario de Mexicanismos.

It was described as a “rolled tortilla with meat or other food within.”

That entry certainly dispenses with the popular folk tale of a man named Juan Mendez who sold tacos from a street stand during the Mexican Revolution (1910-1921) in Ciudad Juarez.

To get his supplies to the street he carried them on a donkey….aka burro. At some point, he decided to keep his homemade food items warm by lightly wrapping them in a large flour tortilla. He eventually realized that this was a pretty good way to serve up the ingredients in the first place.

This is a nice story, but as we have seen, probably apocryphal.

THE FIRST BURRITOS WERE SIMPLE AFFAIRS

Whatever the origin, it seems that the first burritos included a large flour tortilla wrapped around meat, a little sauce, and perhaps some onions and chopped chillies. The invention might even have come about across the border in the United States. Many food historians surmise that the modern burrito may have been a handy lunch for Mexican agricultural workers in the United States. The exact genesis is not known, but it’s generally believed to have emerged in Mexican American communities in the United States, especially among workers in California’s Central Valley (Fresno, Stockton). Farm workers who spent all day picking produce in fields would bring lunches of homemade tortillas, beans, and salsa picante (hot sauce) – cheap and convenient.

In the 1930s, burritos began appearing sporadically on restaurant menus, the first being El Cholo Cafe in Los Angeles. El Cholo is the word that Mexican settlers in California used for field hands.

The first mention of a burrito in the Los Angeles Times wasn’t until 1958, the same year that the term initially appeared in the Oxford English Dictionary. Burritos took even more time to spread further north; the first restaurant in San Francisco to serve one did so in the late 1960s.

Burritos have made up for lost time since then. They’ve acquired a variety of fillings and toppings. American burrito fillings may include not only refried beans (or other beans) and meat but also rice, lettuce, salsa, guacamole, shredded cheese, sour cream, and other assorted vegetables. And it all makes sense.

The beans that universally served in burritos were raised by the Aztecs, but never in the style we call “refried” because that requires lard or cooking oils, which the Aztecs did not have. Rice is an Asian grain brought by Europeans by way of Africa.

The use of cheese, sour cream, and lettuce all originated around the Mediterranean. Of all the ingredients in a typical burrito, only two, onions and guacamole, are indegenous Mexican foods.

Given the recent evolution of the burrito, and the way the once simple formula has been amplified over the years, we at Holy Tequila feel that it’s safe to ignore any claims that one recipe or another is an unadulterated and authentic burrito by which all others should be measured.

THE BURRITO HAS ALWAYS BEEN A PLATFORM FOR CREATIVITY

At Holy Tequila we embrace many variations and we’re certain that if you sample our burrito selections you’ll agree that we have the best burritos on Hilton Head Island. As with most beloved food-stuffs, the burrito dances to many creative riffs. Regardless of your style preference, we have you covered whatever direction you want to go.

One of our personal favorite burrito toppings is guac. This magical green dip is pure bliss. It is a must have for any burrito, whether you enjoy it with us, or make one at home. If you want to learn more about guac check out how much we love guacamole. But, If there’s one thing we can agree on: when done correctly (that’s how we do it!) all burritos insanely delicious.

Want Mission style? We’ve got it.

Want al Pastor? Got it.

As we said, eat what you want.

How about a naked burrito? Ditch the tortilla and opt for a bowl. We have you covered.

Many things are better when deep fried (chicken, potatoes, even candy bars) and the burrito is no exception. So, of course, you can have any of our burritos chimichanga style….we consider it to be the soul food of the southwest transplanted to the Palmetto State.

At Holy Tequila we are proud of serving Mexican food. We believe that it will forever remain popular in America because it’s always evolving. That evolution is how the burrito became an all time favorite and is probably the reason it will stay that way. Join us at Holy Tequila and enjoy your burrito any way you want it!